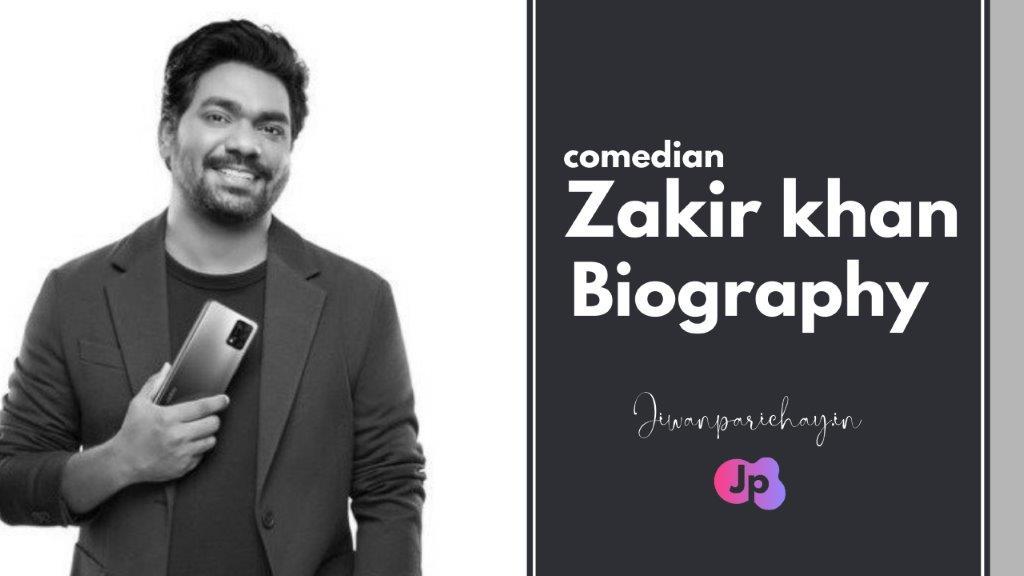 Hello, friends welcome to jiwanparichay.in. Today we will give you complete information about Zakir Khan, who is a famous comedian in India, here In this article, you will get to know about Zakir Khan’s biography, age, girlfriend, wife, family, and the success story of his life.

Zakir khan is one of the best stand-up comedians in India. he is an Indian comedian and actor. In the year 2012, he earned popularity by winning India’s Best Stand Up Comedian contest. He has also released two-hour length standup specials – Haq Se Single and Kaksha Gyaravi on Amazon Prime Video. He has also been a part of a news comedy show, On Air with AIB.

Zakir’s family already belongs to the music industry. His father’s name is Ismail Khan he is a music teacher. along with his grandfather has been a Musician. For this reason, Zakir also wanted to make his own identity. And today his identity has been made in the country of India.

Zakir Khan Is A College Dropout But He Has A Diploma In Sitar. Zakir Says That If He Had Not Been A Standup Comedian, Then Today He Have Been Working As A Music Teacher. he started his career with Fever 104 FM radio channel, in which he got the job of copywriter research. Here he worked for 4 years.

The year 2012 was the year when Zakir Khan gained popularity in the stand-up comedy circuit of India by winning the title of ‘India’s Best Stand Up’, a comedy competition organized by Comedy Central.

In 2015, the AIB YouTube channel was starting its new show, which was named On Air with AIB, so a comedian was needed for this show. After which he was offered on behalf of this show, in which he said yes. after that this show was very much liked on YouTube, which has been a comedy of Hindi version, in this way his identity and popularity went on the increase

Comedian Zakir Khan’s consistent performance and successful shows also led to his selection to the Canvas Laugh Club. In which he did many comedy shows. And apart from India, he has done many shows in Dubai, Singapore, the Philippines, and many more countries in which Zakir has gained a lot of popularity in a Hindi version.

He is known for his punchline “Sakht Launda”, which refers to a boy who has extreme self-control and is not captivated by every girl. and Apart from performing in several stand-up comedy shows, Zakir has also created ghostwriting and radio shows. His comedy was also appreciated in NDTV Prime’s The Rising Stars of a Comedy television show.

Zakir served as a judge on Amazon Prime’s Comicstaan ​​Season 2, where he mentored the contestants in a genre of comedy. Zakir recently worked with Bhuvan Bam in Amazon Prime’s One Mic Stand Season 1 . Along with comedy, Zakir has also produced the podcast series Umaid On Gaana, where he shares his inspiration from his life events with himself and his comedian friends.

Zakir Khan may be a comedian but he also says many inspirational things in his comedy. Zakir Khan is also a very good poet and writer. He has also written much poetry.

We give credit for this post to Zakir Khan because this entire biography is on Zakir Khan. Hope you liked this biography and information about Zakir Khan. You can definitely tell us by commenting below, how did you like this post, and please do share it with your friends.