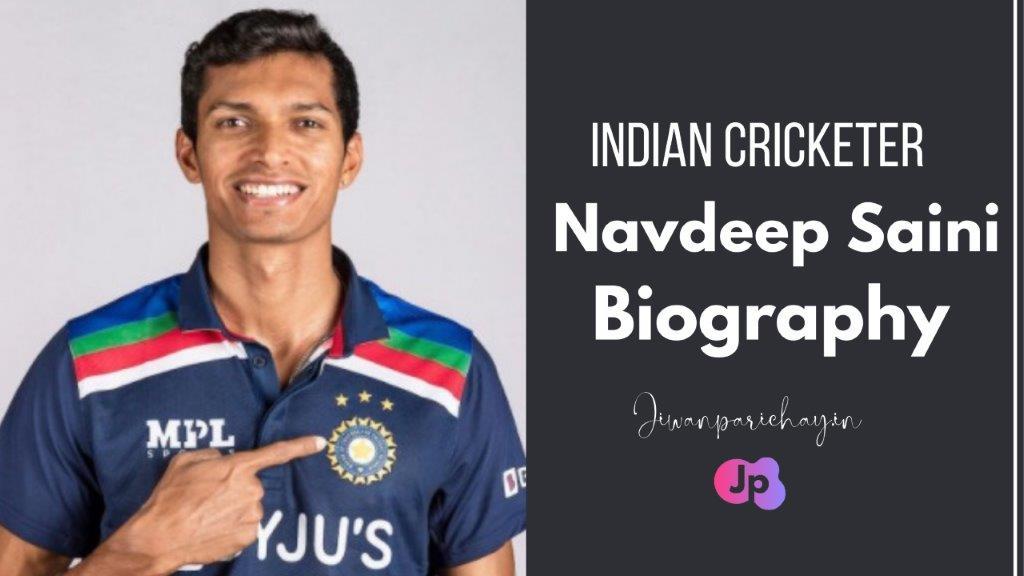 Who is Navdeep Saini

Navdeep Amarjeet Saini is also known as Navdeep Saini. He is an Indian professional cricketer, known for his right arm fast bowling, and right-handed batsman. he was born on 23 November 1992 in Karnal, Haryana. He plays for his home team Delhi and IPL team Royal Challengers Bangalore. he made his international debut for the Indian cricket team in 2019.

Navdeep Saini is one of those bowlers who got on their journey through many troubles. Navdeep Sunny had the passion to become a fast bowler at a young age, in the early days due to the poor financial condition of the house, he could not gather his cricket-related resources, but from the beginning the passion to become a fast bowler was something. It was such that today Navdeep Saini’s name is taken among the most successful bowlers in the India cricket team. Currently, he has the power to dust off the best batsmen in the world, so let’s know, the journey of Navdeep Saini till his arrival on the Indian cricket team.

Navdeep Saini Biography And All About Him

Indian fast bowler Navdeep Saini was born on 23 November 1992 in Karnal, Haryana. He was brought up in a simple family. His mother’s name is a homemaker (duodenum) and his father’s name is Amarjit Singh Saini, a driver in the Haryana government. Apart from this, he has an elder brother, whose name is Mandeep Singh Saini. he did his early studies from a Dayal Singh School in Karnal, and to pursue further studies, he completed his b.tech in computer science from Kurukshetra University.

Today Navdeep Saini is the fast bowler of India, whose journey started in 2013. he started his cricket career when he played for Delhi in Ranji Trophy on 14 December 2013 in first-class cricket and made his debut in first-class cricket. He took 2 wickets in 16 overs while playing the match against the Vidarbha cricket team, due to which Navdeep Saini came into the limelight in the Ranji Trophy.

After performing brilliantly in the domestic cricket team, he managed to make his mark in the eyes of the selectors, after which Navdeep Saini got an opportunity to play the Indian cricket team i.e. international cricket. he made his international debut on 3 August 2019 in T20 cricket against the West Indies cricket team, where he took 3 for 17 in 4 overs with 1 mid over, this was Navdeep Saini‘s most spectacular debut. There was a match, due to which he was fed in the subsequent matches as well.

After starting his career in T20, Navdeep Saini soon made his debut in an ODI cricket match. he made his ODI debut against the West Indies cricket team at Barabati Stadium on 22 December 2019, where he took 2 for 58 in 10 overs. he was one of those players who have consistently taken more than one wicket in their debut match by performing brilliantly.

Navdeep Saini got a place in the Test match too soon due to his excellent performance in the ODI cricket match. And he made his Test debut on 7 January 2021 against the Australian cricket team at the Sydney Cricket Ground, where he took a brilliant two for 65 in 13 overs and made 3 runs in 13 balls.

Navdeep Saini managed to grab the attention of the selectors with his stellar performances in all three cricket formats. He was interested in playing cricket since childhood, so he also found a way to succeed early. Because he got a chance to play in IPL i.e. Indian Premier League. And he made his IPL debut and played his first IPL match against Chennai Super Kings at MA Chidambaram Stadium on 23 March 2019, where he gave 24 runs in 4 overs but here he had a single wicket in his account. failed to achieve.

But he was not kept out of the team and returned soon, he again made a splash in the IPL, playing for Royal Challenger Bangalore, he took many wickets in his name and became such a star in the IPL, Who would not have thought that going forward this fast bowler will emerge as a successful bowler of India.

run machine Virat Kohli biography and all about him click here