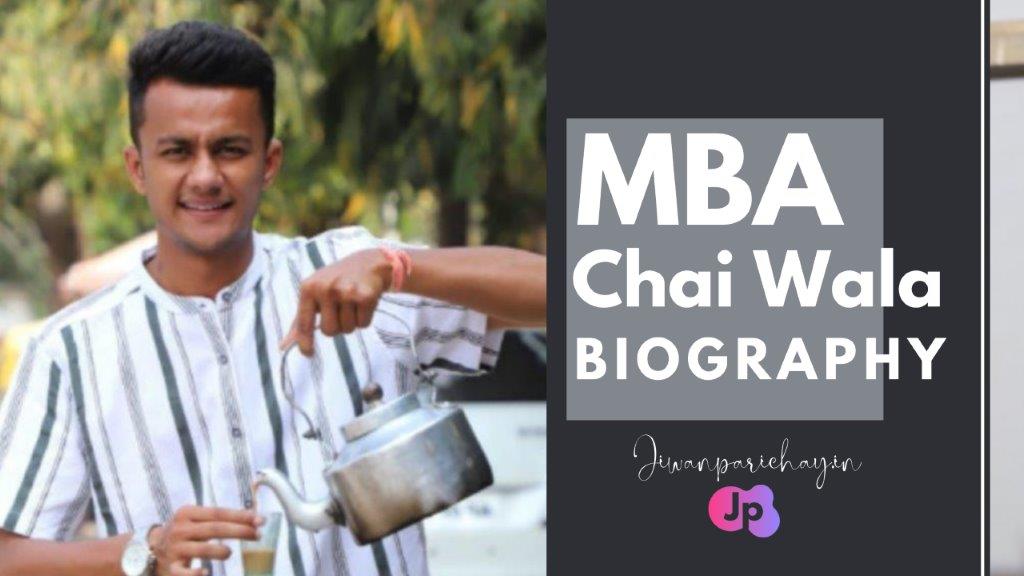 Today in this article we will know about such a tea maker who told people on the basis of his ability that no work is small or big, just the thinking of a person should be big, to make it successful, yes we are talking about. Prafull Billore’s which is popular everywhere today by the name of his famous name MBA Chai Wala. MBA Chaiwala i.e. Prafulla is becoming the inspiration for every youth today. Those who want to do a lot in their life. But his spirits are not as high as Prafull.

No work is small or big. We are going to say about MBA Chaiwala who is India’s youngest entrepreneur who started his business by selling tea. And proved to be a success in that. Despite being an MBA student. He did not consider the task of selling tea as small. Prafull believes that if any work is done in a proper way, then one can be successful in it

Prafulla Billore Who Is Also Known As MBA Chai Wale Was Born On 14 January 1996 In Indore City Of Madhya Pradesh, India. Despite Being An MBA Student, He Started The Business Of Tea, Due To Which Today The Turnover Of MBA Chaiwala Is About 5 To 6 Crores, And Is The Second Most Popular Tea Seller In The Whole Country.

Praful’s father had a dream that his son should pass the CAT exam and do MBA from a good college, after which he too was busy preparing for CAT to fulfill his father’s dream. But despite studying for 8 to 10 hours, he failed CAT exam thrice in a row and finally got a complete break. After which he left the preparation of CAT depressed and started traveling far and wide for weeks in different cities of India.

When he finally reached Ahmedabad, the money had run out and there was no understanding of what to do next. After which he started working in McDonald’s there and when Papa’s call come from home, he was forced to lie to his father That’s admission in MBA and I am studying here. He does not like to lie to his father again and again. That’s why he took admission in MBA in a private college in Ahmedabad and also kept doing a part-time job.

Where Parfull learned business skills, how to talk to customers, all these things in detail. After which the thought of doing something of his own came into his mind. But the question was what to do? Prafull says that he was very fond of tea from the beginning. but He did not have the money to open a good cafe. and else he finally decided to set up a tea stall on the street itself.

TikTok Star Mr. Faisu Biography And all Information About Him – Click Here

After all, one day, he had set up his tea stall on the road. But all this was not so easy. In the beginning, he gets very few customers but he talks to them in English and his customers are curious to know about him that the educated English-speaking boy is selling tea. Similarly, the fan following of his tea increased. And he started earning a lot.

Then came another bad time in his life when the chaiwallahs there thought of avoiding him as his tea shop had come to a standstill. After which everyone together drove them away from there badly. He was forced to leave a place where he had built up so many clients through months of hard work. After that, he resumed his shop search on the streets of Ahmedabad and found them at a shop outside a hospital, and this time he decided to do all the work the right way and thought up the name of his shop.

Prafulla wanted a name that no one had ever used. After a lot of research, he chose the name MBA Chaiwala, which literally means Mr. Billore Ahmedabad Chaiwala, because he was also an MBA student, so this name used to shoot perfect on him. However, at the same time, he left his MBA studies because he wanted to devote all his time to his business.

Seeing the name of MBA Chaiwala on the shop, people make fun of him. But all these things had no effect on him. After her name became famous, he was the perfect choice of people for many other events like local events, musical nights, and many more. He also created an NGO for blood donation social cause empowerment where he holds social events for his tea and donates the proceeds from them. In this way, in 2 years, he did about 200 social events. After that MBA Chaiwala has become a topic of discussion on the whole social media along with Ahmedabad.

On Valentine too, he was in the news on social media for giving free tea to single people. After that, he has also maintained snacks like french fries along with tea. Today there is a franchise named after him everywhere. And because of them, about 50 people have got employment today? At present, his dream is to have his franchise in all the cities of India. Nowadays they are also invited to schools, colleges. Where he teaches the qualities of entrepreneurship to the students.

India’s second richest chaiwala Prafull Billore (MBA Chaiwala) has a net worth of 5 to 10 crores today. Today MBA Chai Wala has 11 Franchises across India and has become the inspiration of many young people in India.

Who is the owner of MBA Chai wala?

how many franchises MBA chai wala?